It’s Ask Me Anything time again! Today, I’m talking about cigar service, because it’s something I learned about last year and it’s now one of my favorite things. Curious what the #AskMeAnything is? Check out the official AMA page on my site over here. 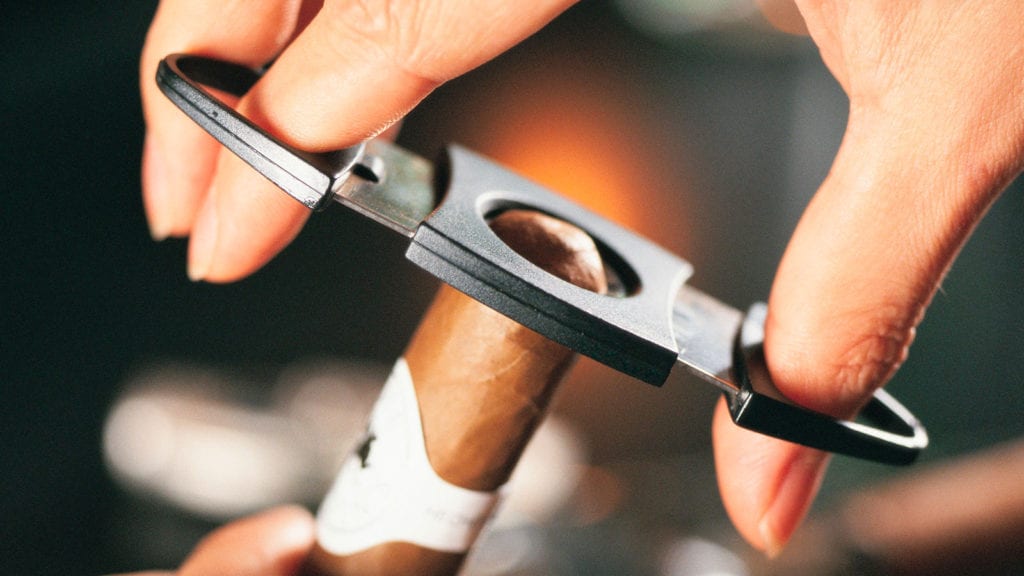 What is cigar service anyway?

First, you need to learn some things about cigars. The best way to do this is by trying them, which if you enjoy smoking cigars (like I do!) is not a hardship. Some cigars need to be cut (like in the picture above) and others do better with a punch (I like Xikar brand, like this one). A cigar cutter means you wants to cut the end you smoke it on and leave a little “shoulder”, meaning you want to cut a little above where the cigar starts to taper. This leaves a slight curve towards the end and helps keep it from unraveling. A punch is where you cut out the middle of the smoking end, and you want to place it as close to center as you can. You’ll get better and better at that with time.

Then, you can “toast” the cigar. At a minimum you want to dampen both ends (damp, not wet) with saliva, and then use the lighter to heat the saliva away. (TIP: Keep the cigar rotating and moving through the flame constantly, you just want to dry the outside of the cigar, not singe the wrapper at all!) The more fun, and much sexier, method is to toast the entire cigar. This means putting as much of the cigar in your mouth as you can take, slide it in and out a few times to get it damp, then switch it around and do the same from the other side. Pretty much, you’re fellating the cigar for their entertainment! Then, still toast it with the lighter, and be careful not to singe the wrapper like I mentioned before. From what I can tell, this does a few things. It adds moisture into the cigar, warms the whole thing up so the flavor is more consistent throughout, and puts on one helluva show. The Doms like it. ^_^

After it’s prepped, and before you light it, you want to offer it so they can check it. Kneel in front of them, hold the cigar in the palm of your hand, smoking end toward them, and then raise it above your head while you bow your head. They’ll take it from your palm, do a test draw to see if air is moving smoothly through it. If it’s not, you may need to correct the punch/cut or toast the ends a little in case you got them too wet. Once they approve it, they’ll place it back in your hand and you light it.

It sounds silly, but make sure you light the correct end of the cigar. It’s the perfectly flat end, with no shoulder. I say this because it happens, especially when you’re all nervous and giddy in sub-mode. Once you’ve lit it, make sure the full end of the cigar is orange when you blow on it. If there are still dark spots, you can use the lighter to target those and blow again to make sure it’s orange. Take a full test draw to ensure it’s drawing smoothly, and then present again. PLEASE make sure the lit end is hanging off the end of your palm, a burn is not fun or sexy, but same rules apply. Kneel, head down, palm above your head to offer it.

They’ll take it and start smoking, and then give you permission to move back to your place, or sit if you’re allowed to sit on furniture. At the cigar events the subs stay on the ground the whole time. We usually just sit though, because kneeling on concrete gets to be fucking miserable after an hour or so. But we always return to a kneel for presentations… or for “taking ash”.

What the fuck is taking ash?!

I’m so glad you asked! Ha! Well, I want to be very clear that this is not an “always” thing in cigar service. Everything I’ve described above is the standard, and taking ash is the next level. It is exactly what it sounds like, when the cigar is ready to ash the Dom will call you over and wait for you to offer a body part. I only do my hands because my skin is extremely fair, and I’ve had burns on my palms from hot ash, but others take it on their breasts/cleavage, and others take it in their mouths. This is going to be a comfort / experience thing, and if you want to try it I recommend starting with the hands.

Kneel in front of them, hold your palms up, together, and they will ash onto the fatty part of your palm near your thumb. Immediately start to roll it back and forth until the heat starts to dissipate a little. Press it between your palms lightly, testing to make sure you’re not going to blister yourself, and then when it’s at a tolerable temperature bring your hands closed, but don’t press them. Offer your hands again and the Dom will press them together with their hands, this (for me the painslut masochist anyway) sends a huge rush through me. It’s hot and sharp and such an intense submissive experience – and I pretty much always come. Part of the coming is because my Dom and I have worked on orgasm control to such a point that I can pretty much come on command (as long as I’m aroused, which cigar service always does for me). When the heat dissipates, blow the ash from your palm (or brush it off of you) and then return to position.

Where do you do this?

We have the cigar events at people’s houses, in their backyards. We live in Texas and so there are a lot of months where the outdoors are friendly, but they stop when it’s 100+ outside or if there’s ice on the ground. Otherwise, they’re pretty spot on. When I’m at the cigar events, I might prepare cigars for four or five Doms and take their ash too. I like the submissive/service aspects of it when I do it for others, but my Dom likes it because all of the Doms ask him before they talk to me / ask me to prepare a cigar / ask me to take ash. It makes it very clear who I belong to. Also, I think he just likes to show me off, which also turns me on to no end. (Remember: What works for you and your Dominant is up to you, I’m just describing our relationship!) Most of the time though (almost once a week) it’s just me and the Dom. Either at his house, or mine, with a glass of bourbon. And when it’s just the two of us he lets me sit in a chair, and we spend an hour or two talking / debating / catching up, which is randomly interrupted by me taking ash or fixing his cigar or pouring him more bourbon and presenting it (I present bourbon the same way I described a cigar, and that’s just part of our dynamic).

If you like cigars, you can do this too! But if you don’t like cigars, or smoke, then I don’t recommend it. It doesn’t matter how hard you brush your teeth, or how much listerine you gargle, after smoking a cigar you’ll wake up like you licked an ashtray. LOL Honestly, I still love it though, and we have a blast doing it.

« Rapunzel and the dark for #SatSpanks!
Music Monday – I Think We’re Alone Now »