Things have been crazy, lovelies. If you have been in my Dark Haven, you saw my live videos of my trip in Seattle. Which was amazing! The trip home, however, wasn’t and it took me 24 hours to get home thanks to the insane Dallas weather and flights being cancelled and delayed over and over. Add the stress of my mom not responding well to treatment and kiddo reacting to that, things have been difficult.

BUT! I realized I hadn’t done a Teaser Tuesday and I could NOT just ignore Addison Cain’s new release, ‘Ravaged Captive’ so I am bringing it to you now. This book is SOO filthy and I just fucking adore Addison’s writing. Her Omegaverse world building is second to none and if you haven’t started the story of Wren, you absolutely have to grab it. With three hot, sexy Alphas all fighting over their claim of Wren, this story will scorch your kindle! 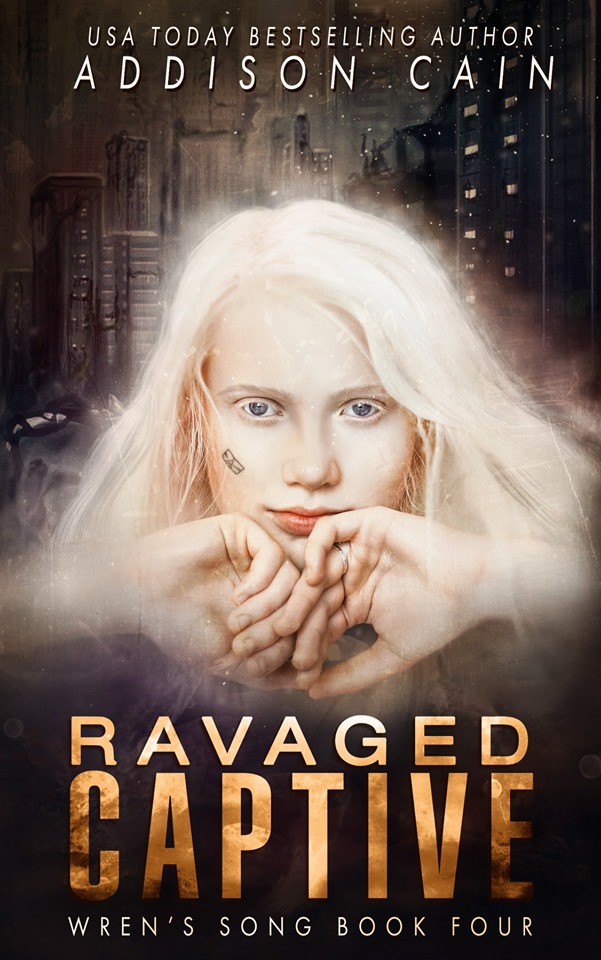 Drenched in wealth and power, Caspian holds my city by the throat. No man or woman denies him, not even me.

But he owes me a debt I intended to collect.

Our trade was fair–my submission to his pack for the lives of my wards.

Pleasure, willing female attention, affection, he’s starved for such things. Starved for me.

And though he may have tricked me into his bed, he will never have what I know he longs for most. My heart.

Not so long as he holds the lives of my family hostage. 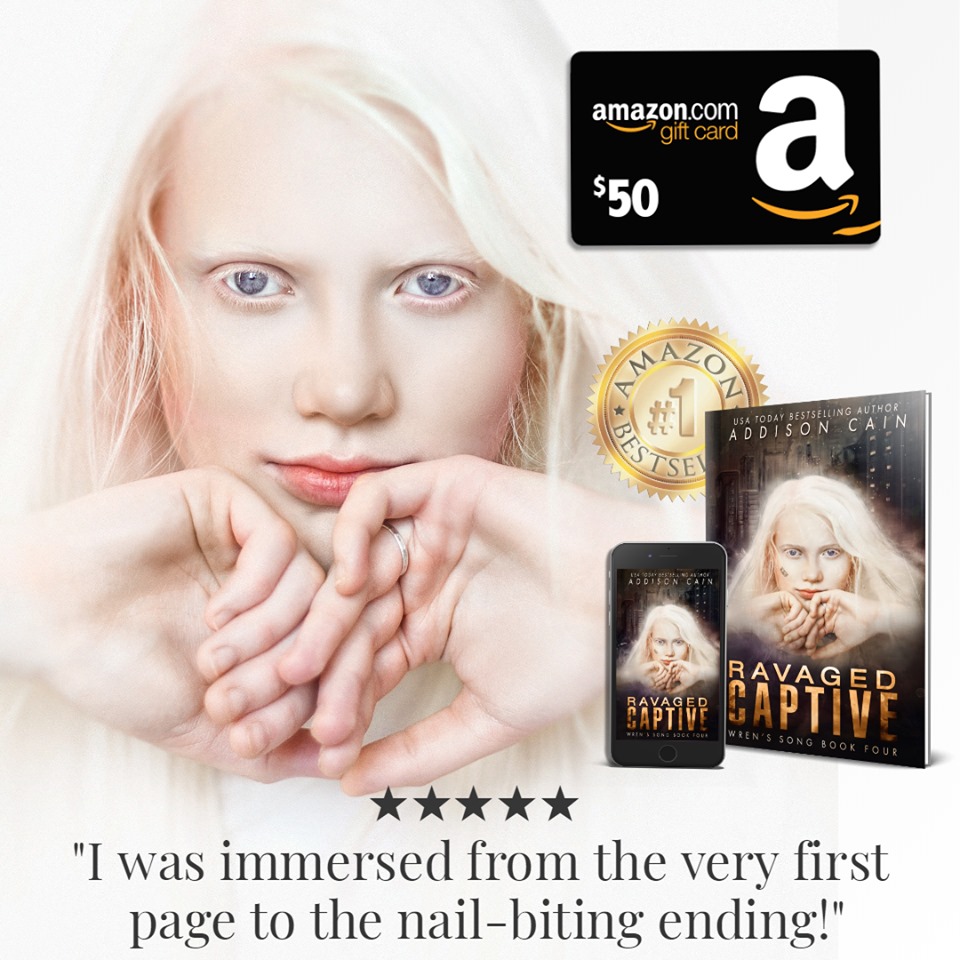 Silk. Spider silk as pale as moonlight caught Caspian in a web he’d gladly tangle around his limbs. Around his cock. Fuck, it would feel incredible stroking his cock.

Running over his hips while he pushed her head down his shaft.

Their last mating had been vulgar in its transience. One frenzied thrust before the knot he’d fought to produce for a goddamn week burst forth. Flooding her so soon had left the taste of heaven on his tongue, even if she had been coated in filth, and stinking of sickness.

As it was, an astonishing amount of fluid had built up in his sack. It felt as if it sloshed when he pressed closer to his greatest treasure, that it churned. Had his pants not held back his prick, it would have bounced with each pulse of blood in his veins.

He was going to hurt his mouse. There was no stopping it.

Not after the hours Caspian had let build between them. Not after her sweet sighs over the feast he’d provided.

For two full days Kieran had been allowed to keep her despite neglecting his duties.

For good reason. Caspian wanted his mouse to be grateful to return to her true owner, her First owner. He wanted to measure her expression of relief when the handsome one no longer had first claim.

It was so rare a victory Caspian might lord over his Second.

Mission accomplished. Kieran reeked of covetous agitation and his mouse had indeed arrived no longer wearing the betrayal that had pinched her brows when last he’d been buried in her.

Two days with the cruelest of them had washed her clean of her animosity, but not of Kieran’s scent… or the Second’s terrible choice in clothing.

That fucking dress covering his mouse was the stuff of nightmares. Where Kieran had even found a garment like that down here, Caspian could only imagine. His whores sure as hell didn’t sport matronly shit.

This was the costume old mated Alphas demanded their Omegas wear in public. The dress of a wife who was to be acknowledged but not physically appreciated by others. Breeding Omegas only displayed their beauty for their mates.

If it was a joke, Kieran lacked the quirk to his smile usually accompanying his tricks. Instead his body language was aggressive—fists balled, jaw clenched, his green-eyed glare on the female obediently allowing Caspian the feel of her mouth.

Until that covetous gaze drifted to where Caspian stared even while sampling the parted lips of his mouse.

Fingers slipping to cradle the back of her skull, Caspian played the gentle lover a few moments longer, measuring the Second’s reaction. Amazed, he found blatant challenge in his subordinate’s low, unguarded growl.

Hell, even Toby had been removed from the equation for this calculated reunion—sent off with the perfect prey. Down in the bowels of the pipeworks, the Third was creaming his pants tormenting the instigator of a sorry power grab.

The failed assassin would be an interesting corpse to view once the Third was done with him—for aside from the sweet scent wafting from the slickening pussy before him, Toby’s greatest joy lay in well-thought-out torture.

Acquiescing when Caspian drew her head to his chest, his mouse inhaled deeply, nosing his chest in the exact way he both adored and despised. Flawless female submission before Kieran, her obvious enjoyment of his scent—despite any unpurged anger—led Caspian to smile.

His rugged, scarred face, the wrinkles collected at the corners of his eyes, she preferred him anyway. And she always had.

This Caspian broadcasted in the meanness of his grin. In the blatant demand of his glare.

At her little noise once his scent hit the back of her throat, another wave of backed up seed inflated his sack, threatened to break down his cock. Caspian growled, dominant, virile, and already lost completely to the rut. “Leave.”

There was a reason Kieran held the rank of Second. He was not one to be fucked with. “I hold second claim.”

Cock twitching, bleeding precum to the point his trousers and the Omega’s belly were sticky with fluid, Caspian fisted the Omega’s glorious hair. Baring her covered throat to his lips, he licked where her jaw met the unpierced lobe of an ear, watching his Second’s every tick. “No one challenged that point.”

Teeth clenched, eye twitching, Kieran stated a tired fact. “Our agreement was that I breed her in estrous.”

“She’s not in estrous.” More importantly, there was a little doll made up to look like the mouse. A doll tucked away in the pen who’d make the breeding of another female impossible so long as she lived… unless she was in the room and made to participate.

No bonded Alpha could dump working sperm in another pussy. Kieran had to know that after these last days hording the mute Omega away. He’d probably had difficulty even knotting, grown frustrated with her.

Brow cocked, chin nuzzling the top of the silent mouse’s head, Caspian added, “Toby refuses to allow other females near our mate. You’d have to kill the doll you paid for.”

And there was always the fact that once Toby got his crack at the estrous high mouse, once he fully forged a pair-bond, his gushing prick would rinse out and destroy any defunct remnants left by another male. Kieran would not have his way in this. Not that he didn’t deserve to be mocked for daring to deliver her cleansed and pristine.

“Done.” Burning green eyes remained locked on Caspian, Kieran physically growing, drilling his attention on his leader, as he verbally ended the life of his doll.

Another point won for the First, his game to seize her full and real attention far more fruitful than he’d imagined when he’d ordered the food and piled up a small fortune. “The doll is claiming pregnancy.”

Considering Kieran’s style had always been petulance, it had been some time since Caspian had seen his Second display this level of outright anger. Running a hand through disheveled hair, snorting a huff of hot breath, Kieran barked, “The bitch wasn’t in estrous. There is no pregnancy.”

It wouldn’t be so easy as that. “The rumor that you’re about to add to your brood has already spread. The doll even demanded a place where Giggi and Oriella den with your other brats.” Because the Second could never resist a bet, Caspian added. “One-million credits that you’ll be clapped on the back when you leave the room. Half the Syndicate is waiting to congratulate you.”

A pale, small hand reached to where Caspian held the mouse’s hair in a tight fist. Stroking his fingers, she tried to urge release.

Distracted, breaking his eyes from the intruding male, mud-brown eyes cut to lavender. Her pupils had retracted, the female no longer in a state ready for mating. She was in a state for scolding—a thing he’d learned she could accomplish with a single look.

Had he been one of her boys, it may have worked.

He was not her child. He was her god.

He’d branded and paid for her, letting her know his thoughts with a lick of his lower lip and a growl.

The scent of slick as it gushed upon his call, softened the hard set of his eyes. The way she pressed her legs together as if she might hold it in, enthralling. “Do you have something to add, pretty mouse?”

Without preamble, her little palm cupped his erection.

And all hell broke loose.

Teeth itching with the need to clamp down and set his mark again, fabric split and fell away in ribbons with his enthusiasm.

And then he saw it… another male’s still swollen mark on her neck.

I’m excited because my next release, ‘Burned’, releases tomorrow. It is so horribly dark and taboo, I hope you read it ONLY if you have read Yolanda Olsen’s Inferno series and liked it. Otherwise, don’t read it and just wait for my next release! It is like a train wreck you can’t stop watching, and it is so very taboo, it will hit on some major triggers that I don’t normally touch!

Until then, I really hope you grab ‘Ravaged Captive’ and enjoy the absolute filth that Addison Cain is known for. I have this bad boy loaded up on my Kindle and I am totally reading it when kiddo goes to sleep tomorrow night!

USA Today bestselling author and Amazon Top 25 bestselling author, Addison Cain is best known for her dark romances, smoldering Omegaverse, and twisted alien worlds. Her antiheroes are not always redeemable, her lead females stand fierce, and nothing is ever as it seems.

Deep and sometimes heart wrenching, her books are not for the faint of heart. But they are just right for those who enjoy unapologetic bad boys, aggressive alphas, and a hint of violence in a kiss.