I am SO EXCITED to start sharing sneak peeks from the wonderful stories in Royally Mine! This boxset is full of NY Times, USA Today, and international bestselling authors, and it’s available on pre-order for just 99¢! Even better, it’s already been a #1 bestseller in 4 categories! Can’t wait for you guys to read the full story behind Finn & Aubrey. <3 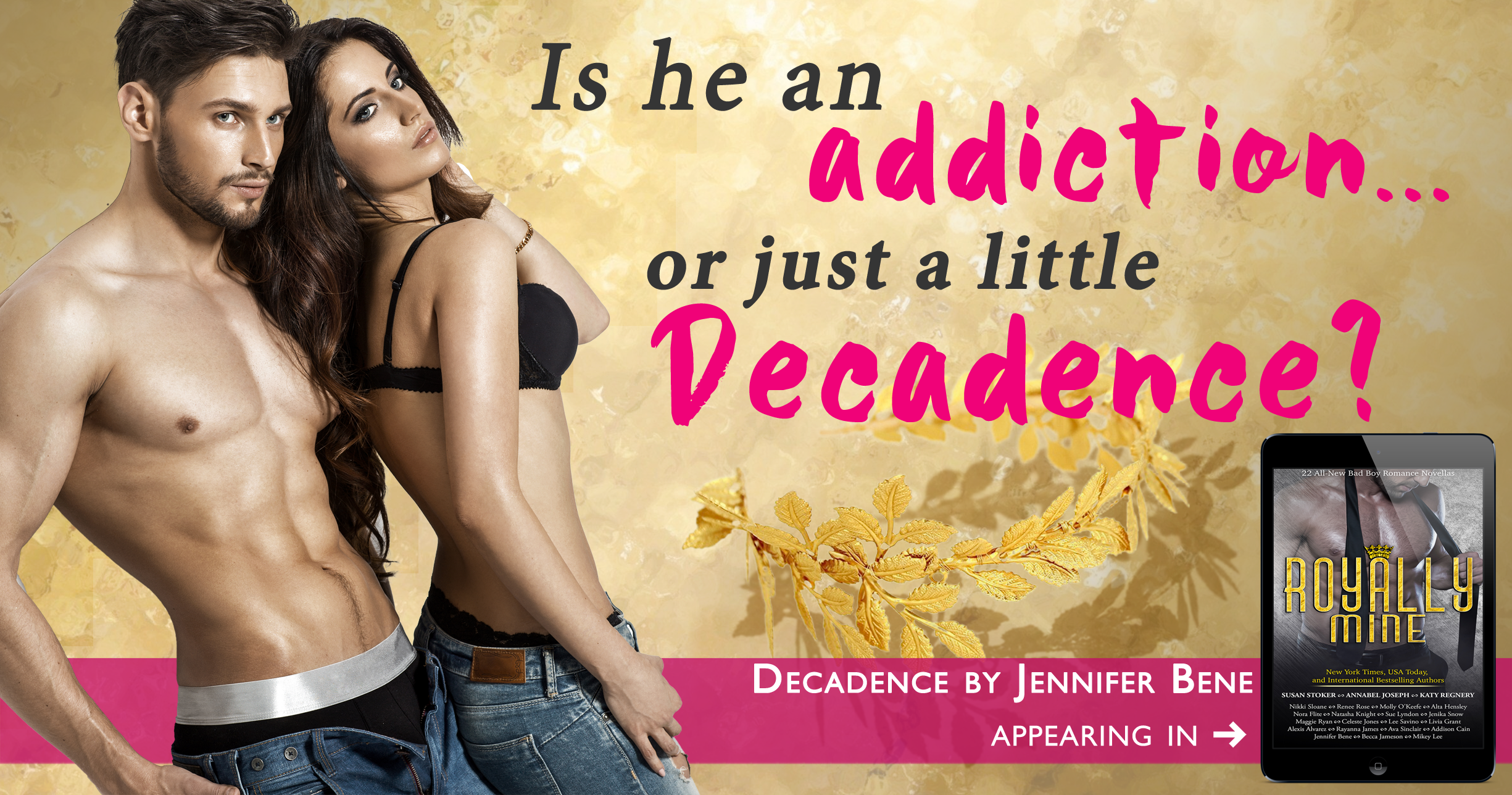 Is this an addiction? Or is it perfection?

Aubrey is trying to get her life under control. More specifically her sex life, and that’s hard to do when blond bad boy Finn shows up in a bar just when she’s jonesing for a fix of someone tall, hot, and good in bed.

He was supposed to be another one-night-stand in a long string of one-night-stands, but there’s more to Finn than what’s in his pants. From his good looks, to his charm, to his wild and carefree life, he seems to be everything Aubrey could want.

But Finn Solberg is hiding a royal secret that could bring all their fun to an end right when he’s realizing Aubrey could be his perfect match. 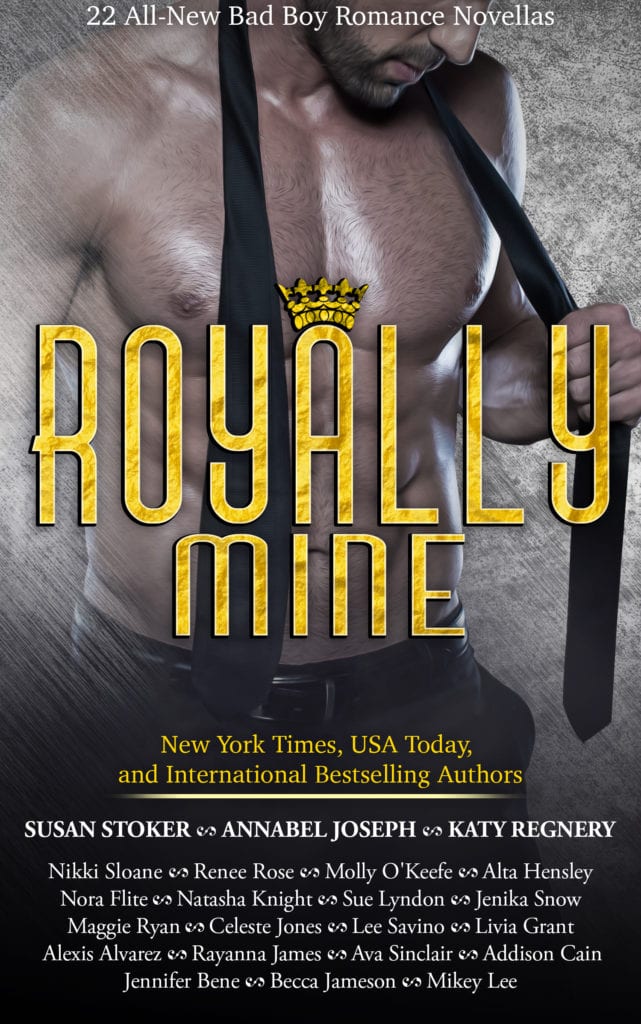 Royally Mine is a sexy collection of bad boy romances featuring HOT royal heroes, brought to you by twenty-two New York Times, USA Today, and international bestselling authors. This deliciously naughty bundle of ALL-NEW standalone novellas stars panty-scorching kings, princes, and dukes who are used to being in command. Charge up your e-reader, clear your schedule, and put on your best tiara, because these royal bad boys are ready to conquer your heart while making you blush oh so hard.

Publisher’s Note: The stories included in this smoking hot box set are MF and MFM pairings. Some contain kink. All will leave you breathlessly panting for more.

Her skin was buzzing, the itching sensation that had tortured her for three weeks, one day, and almost seventeen hours about to be sated in an empty restaurant bathroom.

It’s not like she hadn’t done her due diligence. He had a tan, but no tan line from a wedding ring. He was sandy blond perfection, and she wanted to feel what he could do between her thighs. So much over-confident talk, but he was probably some casting-call groupie. Some wannabe actor, or model, or whatever-the-fuck, wanting his break in LA like a thousand other gorgeous men who stalked the city hoping to get their one shot at stardom — and she definitely wasn’t it.

This guy, Finn, didn’t know her dad, or her mom, and had no aspirations with her beyond getting between her legs… which was exactly where she wanted him.

Dr. Kirkland could lecture her on Monday. Three weeks was a new record, and she could aim for four next time. After she fucked the hottie with the sexy accent and the tempting tilt to his lips that made her want to kiss him.

The creak of the bathroom door momentarily let in the buzz of the restaurant, then it fell shut, closing her in with the hushed sound of footsteps. Aubrey had pressed the last stall door closed, but he pushed it open confidently, his fit form filling the doorway as a wicked grin tainted his lips. “Did you just tell me to fuck you?”

“Did I get your third wish wrong?” she asked, leaning back against the white tile.

“Not at all, beautiful.” Finn stepped in close, slamming the stall door and flicking the lock without pulling those perfect green eyes from hers.

“Good.” Reaching forward she tugged him against her by the edges of his tasteful, camel colored blazer, and his lips collided with hers. Without missing a step Finn had his hands on either side of her face, his body pressed against hers, and she knew she had him. He nipped her bottom lip as he grabbed her thighs, lifting her effortlessly so that her legs split around his hips.

“Do you do this often?” his voice rumbled against her lips, and she grinned.

“Why? You don’t feel special?” Aubrey rolled her hips as he let her drop a little so that she could feel his erection rubbing against her core, confirmation that all her flirting and teasing had paid off.

“I always feel special, beautiful.” The words were spoken between nipping kisses down her neck, brushing over her collarbone as he nudged her top out of the way. All of it said in that delicious accent that had her clit pounding with the promise of what he could offer her.

“Then fuck me,” she demanded, her voice breathy.

Finn leaned up, those gorgeous eyes meeting hers as his pupils dilated. “You’re unreal.”

“Not the first time I’ve been told that.” She leaned forward to kiss him, and he slammed her back against the tiled wall, the pressure of his body against hers becoming a form of euphoria after her horrible bout of abstinence. The need inside her quickly turned into a molten heat that focused between her thighs, making her whine against his lips as he mimed a thrust. Every brush was a taunt, a too-light touch, and she wanted more, wanted all of him — and she was done waiting. “Please,” she gasped, and he growled against her skin.

I cannot wait for you guys to get your hands on this story. It’s dirty and fun and was an absolute blast to write! I love Finn and Aubrey and their relationship so much! I even want to write more of their story in 2018! They are just too fun to let go!

Make sure to pre-order this amazing boxset for 99¢ before it comes out on August 22nd, and stay tuned on my blog for more delicious snippets from other authors!

Want to stalk me all over the internet?