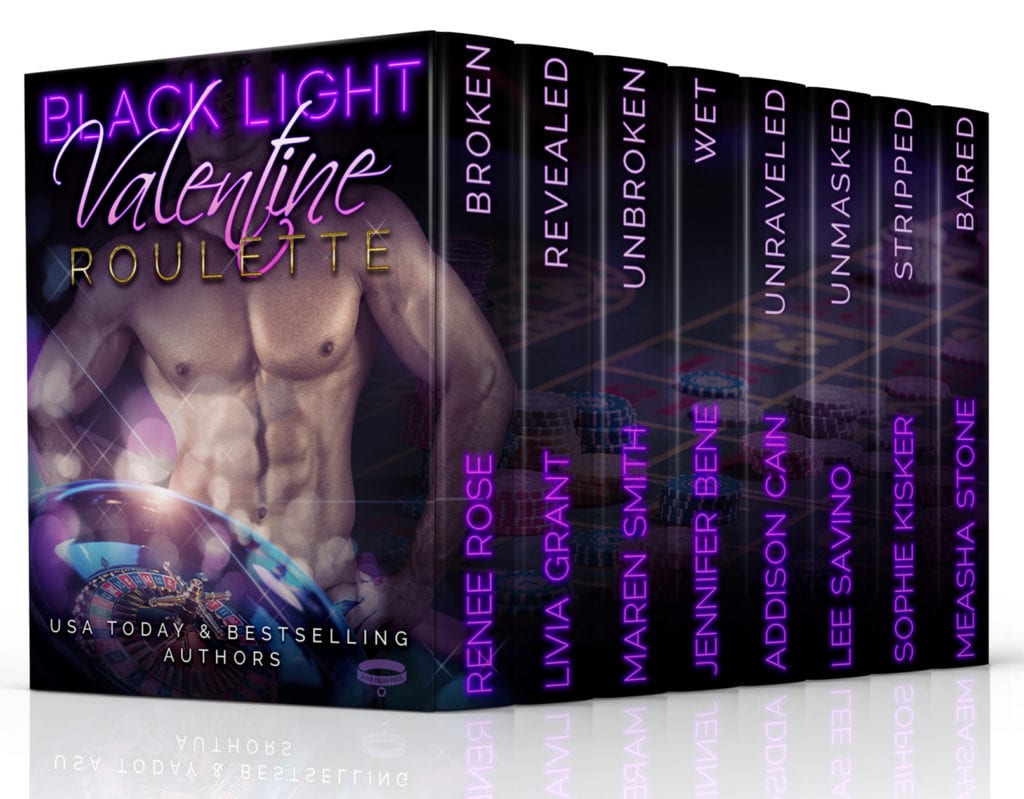 Update! It’s available NOW and only $2.99 for a limited time! Get your copy now!

To celebrate the countdown to Valentine Roulette and our release weekend, I’m sharing burning hot snippets from each of these incredible books in the box set! Each and every one is kinky, dirty, and so much fun – and I hope you all love it! It’s coming soon, but today we’re going to take a special look at Renee Rose’s contribution to the set ‘Broken.’ 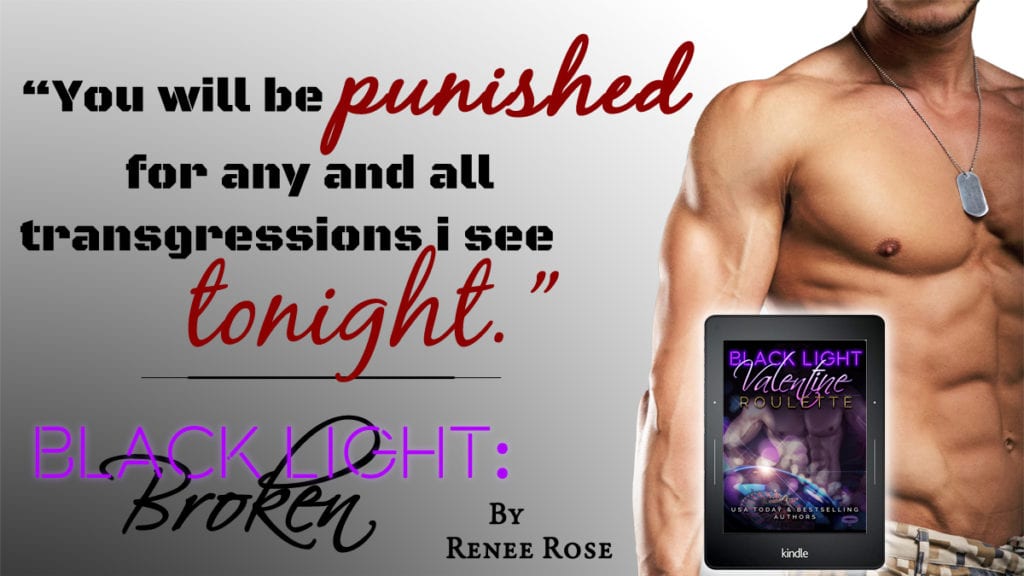 She likes it hard. Cruel. And impersonal.

He wants to crack through her walls.

When the sub known as Slave to Pain spins ageplay, she rolls her eyes. Major Jennifer Riggs doesn’t do fluffy, or pigtails, or baby talk. Doesn’t need to be cuddled or held. She likes to get in and get out, where only her body gets hurt. And she already has the perfect dom – a sadist who gives it hard.

Derek, aka Master D, has been trying to break through his sub’s tough walls for months. When someone else lands her for the Roulette event, he takes matters into his own hands and swaps for his girl. Ageplay isn’t his thing, but this may be the perfect time to get past her defenses and give her the support she always shoves away. But when he pushes her past the breaking point, and she comes up swinging, Derek realizes he may have just lost the one sub who was the perfect match for him.

She jerked when, suddenly, Master D appeared in front of her, his barrel chest clearly defined with muscles beneath his tight black T-shirt.

“Jesus, where’d you come from?”

Damn, he was stealthy for such a big guy.

He shoved her up against the wall, pinning her wrists above her head with one hand, the other gripping her jaw to hold her face in place. His thigh wedged between her legs, forcing her feet apart and giving her something to grind down on. “Did you wear that dress for them?” he growled.

A wave of knowing washed over her. Yep. He was going to see this as a betrayal. Something in her stomach knotted. She opted for a truth that wouldn’t piss him off.

The thumb of the hand gripping her jaw eased and slid over her skin, stroking her cheek. “Did you?” His voice was a purr now.

“Yeah.” She’d lost her breath. It always seemed to happen when he dominated her. Sometimes she hated herself for it—she wasn’t allowed to feel fear, after all. But, at some point, she’d drawn a line. The sub she became in Black Light was someone else. Someone who liked to surrender. Liked to get scared and excited by a man bigger than she was. It didn’t reflect on Major Jennifer Dibbs. It wasn’t a personality flaw—it was a kink. Just about sex and the way she liked to do it. Another reason to keep things separate and clean. She didn’t need her headspace to get fucked up by her kink.

He yanked the neckline of her dress down under her breasts. If the fabric hadn’t been so stretchy, it would’ve torn. He shoved the cups of her bra down next. “Are you going to let them see these pretty little boobies?”

Ouch. Yeah, they were little. She knew it. They weren’t her best asset. But she still didn’t love hearing them called little boobies. He probably guessed that, like he guessed everything about her. His hand cupped one, somehow making it seem bigger than it was by wrapping around to hold her muscle on the side, too. Bless the man.

He arched a brow. “You don’t know?” His voice sounded incredulous. “Well, you’d better decide, little slave, or the decision will be made for you.”

Her head wobbled on her neck. “Probably,” she whispered.

His face turned stony. He pinched her nipple and twisted.

She shrieked and tried to rise up on her tiptoes, but he had her pinned too tightly.

“You will be punished for any and all transgressions I see tonight.”

What the fuck? They didn’t have any rules or arrangements for her to transgress against. But her pussy had just turned molten at his words, the idea of punishment at his hands so terribly exciting she didn’t care how unfair the statement had been.

He continued to hold her nipple in a tight twist, sending shards of pain sprinting out through her breast.

He waited one beat. Two. Then his grip on her breast and wrists eased, his palm massaging her wounded breast as he leaned over and bit her ear. “I’ll be watching,” he growled against her neck, then kissed it, his lips suddenly soft, the gesture oddly tender.

It made her knees go weak.

Good thing he was still holding her up.

Renee loves to connect with readers! Please visit her on:

Well, first, stay tuned every day this week for more HOT sneak peeks of these books. Watch for the release day link on February 10th, and remember that you can still enter our giveaway right here!

Get ready to explore some of your naughtiest desires while you celebrate Valentine’s Day with eight kinky stories from eight USA Today and international bestselling authors! Black Light is the most exclusive BDSM club in Washington, D.C. and for one night they’re changing the rules of play to entertain their members with a game of chance – Valentine Roulette. Challenge and adventure awaits as these sexy dominants spin to win their submissives, and the subs spin to choose how they will play. Their prize if they last the night? One free month at Black Light, and for some of our daring participants… even a chance at love.

Are you brave enough to spin the wheel?

« #MusicMonday – Learn to Drive
Teaser Tuesday! ‘Wedded to the Warriors’ by Sara Fields! »