Oooo, you lucky, lucky lovelies. I have a book to tease for you today that was almost banned by Amazon! Sophie Kisker does an incredible job of writing about slavery in alternate worlds, and she must have ruffled someone’s feathers at Amazon with this second book in the ‘Midrosian Chronicles’ series because it almost didn’t get published!! Fortunate for all of us, it’s out, and it’s wonderful, and you can get a taste of it right now. 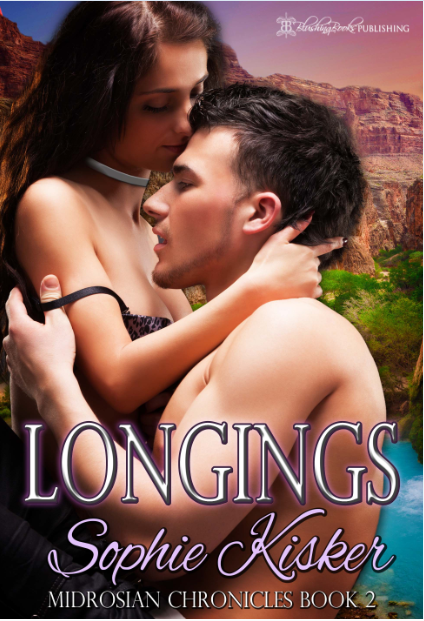 On a world where all women are slaves, one woman refuses to submit.

Enna is a runaway, forced to hide in the desert mountains with others like her. But despite the harsh environment, what she’s escaped from was intolerable, and she’ll never let herself be captured. When a chance comes to find her daughter, ripped from her arms just months before by her sadistic master, she only has her courage to fall back on, because she trusts no one else. Especially another man.

Captain Matias Acoff found his missing sister on Midros, kidnapped as a child from their home planet and raised as a slave. Now he’s helping to sort out other kidnapped women and return them to their homes. When he meets Enna, he finds himself involved with a group of runaway slaves. Even if she accepts his help to find her daughter, he can’t free her. She’ll always be a fugitive. And if she’s found, the law is clear, and the punishment for running is severe. When his assignment ends, how can he leave behind the woman he’s come to love, to face that by herself?

Her master approached. “So. Your lover. Did he do this?” He jammed his fingers between her legs and she arched backwards. He twisted his hand around inside, scraping his fingernails on the delicate lining, until she screamed.

“Did he do this?” he repeated.

“Well, he wasn’t much of a lover, was he?” He yanked his fingers out. She hung, gasping, as he walked over to the table and came back with the illegal plasma whip. He held it up in front of her face. There was a small dial set to ‘4’ on the handle. That was the level that had caused the burns on her back. As she watched, he dialed it up to ‘8’, the highest setting. She struggled to keep the panic from overtaking her. A single strike that wrapped around her could kill.

“Don’t worry, my dear. You’re too expensive. I’m just going to hit you with the tip of this, enough to cause a staggering amount of pain. I’ve been practicing since you left, getting ready for just such a day as this. Ready?”

She ignored the question, and he swung.

This book has the kind of darkness that makes us all tingly, and the kind of lightness and joy that makes you cheer for the hero and the heroine. Sophie walks the line between the two with a wicked tongue and a delicate balance that you’ll love. You don’t have to read book one of the series, but I do recommend it so you have a better understanding of the planet of Midros and their evil, evil ways. Also, there’s really hot sex scenes. ^_^

Sophie Kisker started composing stories of domination and submission long ago, but it wasn’t until she met others on the internet that she realized she wasn’t alone.   Her stories are sometimes dark and uncomfortable, but they will always have a happy ending. She’s a true believer that romantic love and a riding crop can make a great combination.

During the day, Sophie is busy with job and family, but in the evening, her laptop comes out, her imagination gets going, and she morphs into a recluse who would be happy living in a cave, as long as it had wireless internet and an espresso machine.

« Music Monday – Everything You Meant to Me
I’ve got something wicked for you on #WIP Wednesday! »