Well, lovelies, it’s Tuesday and I’m starting a new tradition called ‘Teaser Tuesday’. I get supported by so many author friends who are putting out amazing books all the time, and while I always try and share about them on social media – I hate admitting that sometimes they slip through the cracks. That’s why I’m starting a tradition of posting a new release every Tuesday! First up has to be the author that inspired me to do this, my dragon (inside joke), the wonderful, lovely, Sara Fields.

Her latest book is a HOT sci-fi spanktastic menage that I hope you’ll 1-click! Check out the teasers below. 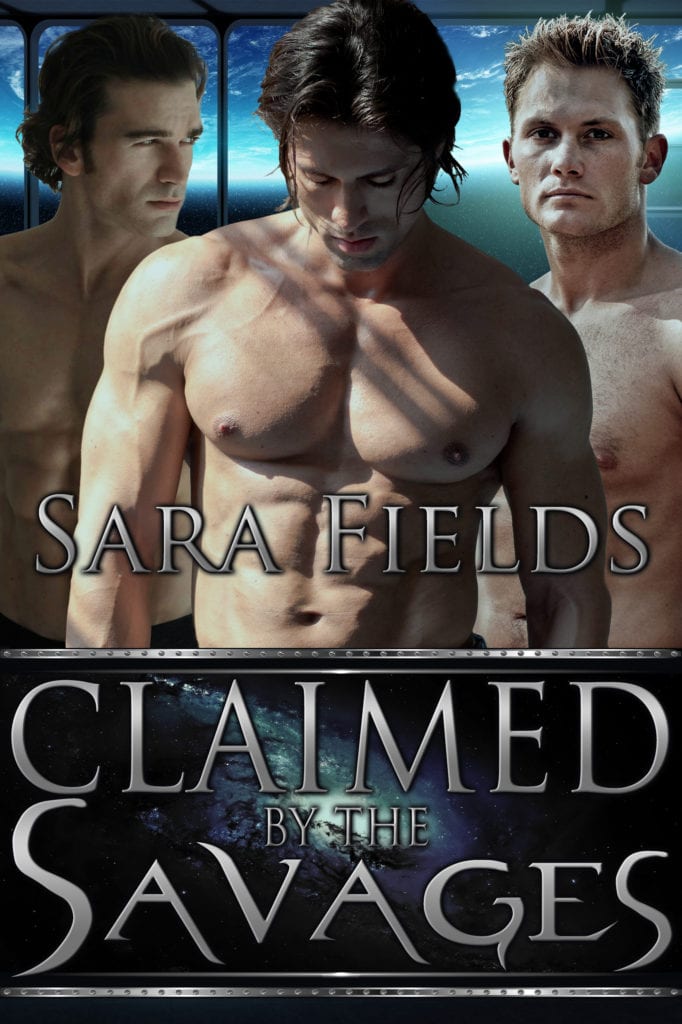 Claimed by the Savages

As an unauthorized third child, nineteen-year-old Aimee Harrington has spent her life avoiding discovery by government authorities, but her world comes crashing down around her after she is caught stealing a vehicle in an act of petulant rebellion. Within hours of her arrest, she is escorted onto a ship bound for a detention center in the far reaches of the solar system.

Soon after her arrival, however, Aimee is made aware that this facility is no ordinary prison. It is a training center for future brides, and once she has been properly trained she will be thoroughly examined and then offered to an alien male in need of a mate. Worse still, Aimee’s defiant attitude quickly earns her the wrath of the strict warden. To make an example of her, Aimee is given as a wife not to a sophisticated gentleman, but to three warriors of the planet Primorion.

Though Primorion males are considered savages on Earth, it doesn’t take long for Aimee to realize that while her new mates will demand her obedience and will not hesitate to spank her soundly if her behavior warrants it, they will also cherish and protect her in a way she has never experienced before. But when the time comes for her three dominant men to master her body completely, will she find herself begging to be claimed by the savages?

Publisher’s Note: Claimed by the Savages includes spankings and sexual scenes. If such material offends you, please don’t buy this book.

Moist desire pooled between her legs, trickling down her thighs and she groaned as she unsuccessfully tried to squeeze her limbs together. Her chest heaved with arousal and their lips began to brush against the tiny hairs of her skin, igniting shivers throughout her body. Two of them kissed either side of her neck and the third began to caress her breasts, heavy and tight with her lust. Her nipples pebbled at his attention, hardening painfully as he took one and then the other in his mouth. Tongues swirled across her flesh and she arched into them. Hands stroked her aching buds, squeezing and pinching her nipples, while yet another grazed her neck and pushed up into her long dark locks. His fist tightened, pulling her hair back painfully, but she moaned at the feeling as electric desire shot straight to the bundle of nerves between her legs, already desperate for their attention.

The first voice that spoke was soft, almost sweet, making her yearn to please him in whatever way he demanded of her.

“I heard you were a bad little girl, kitten. And that means you’re going to be spending some quality time over my knee getting your bottom spanked until I decide you’ve learned your lesson.”

She moaned out loud, imagining her naked body lying over his thighs, his heavy palm spanking her bottom cheeks red for her disobedient behavior. Another voice whispered in her ear, this one gruffer, expectant of her immediate obedience.

“I told you to get on your knees and suck your men’s cocks and you failed to obey me. Instead, you’re going to get spanked by me too, only I’m going to use my leather belt on your naughty backside to teach you to never hesitate when I give you a command again.”

Her bottom tingled in anticipation of his leather lash and she whined with need for it. Her hips rocked, almost as if his punishment was already about to descend on her quivering, trembling cheeks. A third voice met her ears, low and sensual, yet full of confident promise. Her pussy ached to be filled by all three of them, one after another and she moaned, all her senses heightened to such a state that she didn’t know how much more she could handle without combusting in a never- ending orgasm.

“You denied me access to your body, gorgeous. I cannot condone such naughty behavior. I’m going to stretch that naughty bottom of yours nice and wide, then fill it with my cock. I’ll make you beg for me by the time I’m finished with you,” the third voice whispered into her ear.

HOLY. HOTNESS. I know you’re going to want to snag a copy of this ASAP, so here’s the buy link! Enjoy, lovelies!