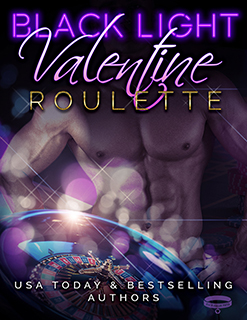 Are you brave enough to spin the wheel?

Get ready to explore some of your naughtiest desires while you celebrate Valentine’s Day with eight kinky stories from eight USA Today and international bestselling authors! Black Light is the most exclusive BDSM club in Washington, D.C. and for one night they’re changing the rules of play to entertain their members with a game of chance – Valentine Roulette. Challenge and adventure awaits as these sexy dominants spin to win their submissives, and the subs spin to choose how they will play. Their prize if they last the night? One free month at Black Light, and for some of our daring participants… even a chance at love.

Enjoy over 200,000 words of edgy, romantic stories including:

When the sub known as Slave to Pain spins ageplay, she rolls her eyes. Major Jennifer Riggs doesn’t do fluffy, or pigtails, or baby talk. Doesn’t need to be cuddled or held. She likes to get in and get out, where only her body gets hurt. And she already has the perfect dom – a sadist who gives it hard.

Derek, aka Master D, has been trying to break through his sub’s tough walls for months. When someone else lands her for the Roulette event, he takes matters into his own hands and swaps for his girl. Ageplay isn’t his thing, but this may be the perfect time to get past her defenses and give her the support she always shoves away. But when he pushes her past the breaking point, and she comes up swinging, Derek realizes he may have just lost the one sub who was the perfect match for him.

The confidentiality of Black Light may protect Khloe from the paparazzi, but who will protect her from the devastatingly handsome, yet dangerous, Dom she’s been paired with?

Abby didn’t know what she’d first done to get on club dominant Newton’s bad side, but she went out of her way to earn the dark glowering looks he so loved to give her. Newton had no idea what he’d done to deserve it, but for two long years mischievous sub Abby had gone out of her way to make his life at the clubs a living hell.

Imagine her surprise when Newton also showed up with playbag in hand for Black Light’s first annual event. Imagine his dismay when he spun Abby’s name, attaching himself to her for the duration of the night.

MAREN SMITH is an USA Today bestselling author with more than 20 years’ worth of books in print. She is well known for both her slightly twisted sense of humor and her unhealthy love affair with coffee.

Sienna doesn’t like to talk when she plays at a club. She likes to escape, to be treated like an object so she doesn’t have to think. It’s nice, it’s easy, and she can do it with just about anyone… or so she thought.

When she gets paired with Alexander, a Daddy Dom who insists on calling her ‘little girl’ and making her talk, she realizes that spinning a giant water tank for breath play is the least of her worries. Now, with every unanswered question, she’s plunged into icy water – but the tank isn’t the only reason she’s wet.

Pleasure and pain give Sienna’s temper a voice, but will it force her to connect with herself and the man whose talented hands she’s beginning to crave – or will she break under his touch? And if she does shatter, will Alexander be able to put his little girl back together?

Sending her packing escalates the issue. Klara finds her way back into Black Light as a last-minute participant in the Valentine Roulette party. Desperate to regain her job, Klara offers her ex-boss a wager. If she makes it through the night submitting to a stranger, he rehires her on the spot.

ADDISON CAIN is the author of the international bestselling Alpha’s Claim series. She has a penchant for dark themes and unrepentant lust. Heroes are villains, wrong is right, and concepts of obsession color her tales beyond simple black and white.

A ruthless master. A reluctant submissive.

Can Chessie get over her prejudice against him — and her reluctance to submit to her inner desires — to achieve the pleasure she craves at the hands of Master Kane?

LEE SAVINO is an USA Today bestselling author of sexy, sexy romance living in Virginia with her husband and little boy. No matter what genre she writes in she loves to write books about strong women and the sexy men who love them.

Adam Quinn and Sari Friesen have been matched for Valentine Roulette.  He likes her curves and her smile.  She likes his dark eyes and his self-assured dominance. But life hasn’t been easy for either of them, and trust comes slowly.

If they can work together for three hours as dom and sub, through a hot wax scene, a whipping, and a capture fantasy, they’ll win the prize.

But the secret that one of them is keeping threatens to strip away the tenuous attraction that’s growing with every spank, whimper, and moan. At the end of the night, will there be anything left to salvage for a future?

Riley can’t remember the last time she played with a Top she couldn’t manipulate. That’s the problem. She wants something more than topping from the bottom, and she’s convinced herself that the Valentine Roulette event is the place to find it.

But when she’s paired up with her ex, her confidence waivers. Dane knows her too well, has been watching her for months, and he’s not going to give up this time. Will he be able to breach that wall she’s been building since she ran out on him all those years ago? Or will she run again, lose the game, and her chance at love?