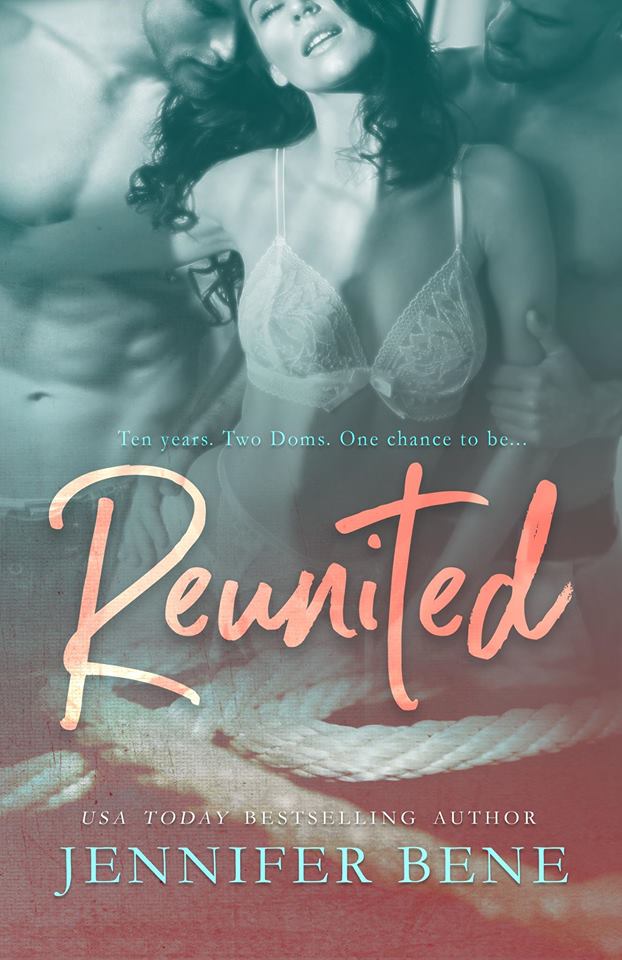 This second-chance romance is seriously my lightest, happiest, most warm and fuzzy story. It may be BDSM menage, but there’s not a hint of darkness (shocking! I know). It’s about a girl named Megan who goes to her 10 year high school reunion dreading it completely. But then she runs into her old high school flame, and his bestie, and things get really hot and really heavy. This book also has one of my favorite epilogues I’ve ever written because it is the epitome of the happily ever after. I love it so much, and this new cover captures the hotness AND the warmth of this book so well. Another knock out of the park for Laura Hidalgo! <3
~*~*~*~*~
Ten Years. Two Hot Doms.
One chance to be ‘Reunited’!
Megan Harper hasn’t had the best decade since she left high school and the love of her life behind. She gave up on her dreams and dropped out of college to get married, only to have her marriage fall apart leaving her divorced, disappointed, and back at square one trying to get her life started again.
When her high school reunion comes around she doesn’t want to go, but her sister insists. That’s how Megan finds herself dressed up at her old alma mater hoping her miserable evening ends quickly. That is until Eric Lewis, her gorgeous, hot, and once-dominant high school flame, shows up and only has eyes for her. When Colby Warren, the playboy of Whittaker High, joins them and seems just as intent on having her attention for the night she feels like she’s dreaming.
As both men dance and flirt with her, it becomes increasingly clear that not only do they both want her, but that Eric’s urge for dominance has only increased in their years apart. Will Megan dive in for one last fling in the halls of her school, or will she run and miss the chance to be reunited with the one man that’s haunted her for years?
~*~*~*~*~
Check it out lovelies, and I hope you enjoy!
➡ https://amzn.to/2LzH2fQ